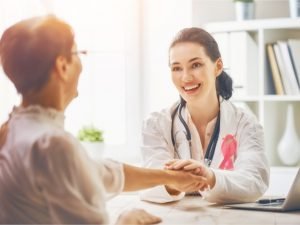 Rita ended up in the hospital again, this time with sepsis. She had been here before, due to infections and wounds caused by legs that continually swelled. Time and time again she had sought medical help but to no or little avail. After the hospital stay came the nursing home. Then finally home again with a physical therapist to help her gain back some of the ground she had lost spending so much time immobile.

This was a new therapist, which disappointed Rita. She liked her last home health therapist a great deal. However, she had little say in the matter as her old therapist had left the organization. Finding a good therapist can be challenging at times. Now she says that her new therapist, Monica, was a God send. She was the first person in nearly 17 years who recognized and properly diagnosed her condition, lymphedema.

Seventeen years ago Rita had had a complete hysterectomy. Shortly thereafter, her and her husband noticed an area of swelling on the right side of her abdomen. When she consulted the doctors they told her not to worry, it was due to the surgery and would go away. Well it did not go away. It moved down into her thigh and upper legs where it continued to grow and swell.

She developed a large lobule behind her right knee. Her lobule made it difficult for her to get around. As the lobule grew she was unable to enjoy many of the activities she had always loved. She could no longer garden or hike in the Virginia Mountains where her and her husband had a cabin. The lobule became so large that Rita would rest it on a pillow as she sat in her recliner. She put a baby diaper underneath to soak up the weeping from a leg that had swollen so large that the fluid had nowhere else to go.

Still she could get no help. Every time she would seek medical assistance they would tell her she just had a weight problem. One doctor while examining her leg said, “I’ve never seen anything like that, I don’t know what to do with that!” At which point Rita was reduced to tears. No one would or could seem to address the issue of the swelling and the lobule continued to grow. Her son researched the problem and suspected that it might be lymphedema. When they suggested this to the doctor, he told her, “You have way worse problems than that, here’s the name of a bio gastric surgeon.”

The inability to walk properly because of the size of her legs caused many problems over the years. Weight gain, issues with her hips and back, not to mention numerous infections and wounds – some landing her in the hospital. It’s hard to understand why no one addressed the lymphedema or would even consider the possibility. Was it because she was a large woman and that was all they could see? Even when brought to the doctors’ attention, they still misdiagnosed the lymphedema. Thankfully, there was a home health therapist that recognized the condition and was able to address it. Finally, Rita got the help she needed after so many years. 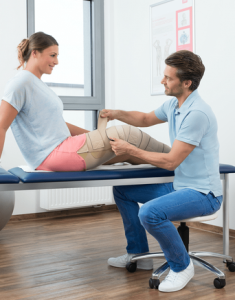 Monica, her home health therapist began MLD (manual lymphatic drainage) and got her into a Medi Reduction Kit to address the main issue for Rita, which was her right thigh and the lobule that so often caused wounds and infections. She also put her into a lower extremity wrap garment made by Sigvaris called the CompreFlex, so that the fluid didn’t travel distally. Within a very short time her lobule was no longer hard and had reduced significantly in size. It no longer looks like a basketball but a deflated sack. Rita can now move and walk much better and is regaining her ability to take care of herself and her husband.

Monica now has both of Rita’s legs wrapped and she is doing much better. I believe it’s not just her quality of life that has improved, but her outlook on life as well. Chronic diseases, such as lymphedema, can really take a toll on ones emotions. However Rita found someone to listen. Finally someone understood the condition and the problems she has been going through. Someone could help and someone did.

Over 250 million people around the world suffer from lymphedema.  A parasitic infection caused by a roundworm is the number one reason. It affects more than 5 million in the United States. However, the number one cause in the US is damage to the lymphatic system due to cancer treatments. There is no real cure for lymphedema, yet it can be managed and treated, especially if caught early.

I am so very happy for Rita, but I am also sad that it took so many years for her to be heard. If this issue 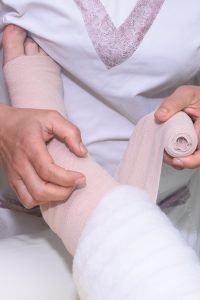 was addressed when the problem arose would she have the issue with her hips and her back? Would she have had to spend so much time in the hospital with wounds and infections? Would she need home healthcare? Seventeen years down the road this condition becomes much worse and much more difficult to handle.

Lymphedema is a serious problem that we need to address now. With the aging population, the increase of surgery and medical treatments, and obesity in this country, the problem is not going away. Lymphedema is misdiagnosed way too often. It’s time to put an end to the ignorance of this condition! Knowledge is power! Be your own advocate, educate your physician and medical team if necessary. It’s time to speak up, loudly if need be. Together we are stronger ~ together we are empowered!

One thought on “Misdiagnosed Lymphedema”